EVOLUTION OF ROOFTOP SOLAR IN INDIA 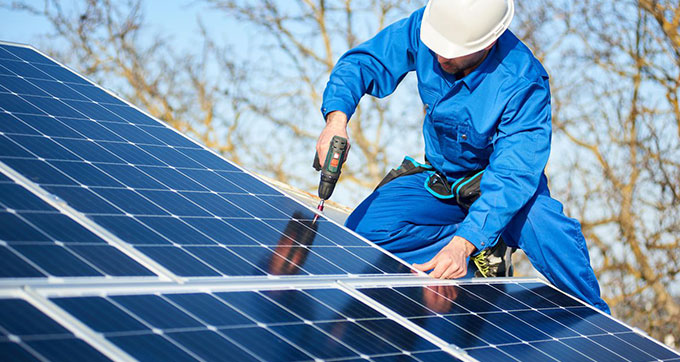 Within this capacity, over 80% of installations are by large industries, commercial and government buildings. In many cases, it has been observed that distribution companies (DISCOMs) show limited interest in rooftop solar installations primarily due to the reason that it will reduce power sales and hence lead to a loss in revenues. In this context, multiple business models could be developed on a case to case basis for DISOCMs to get involved more actively in rooftop solar deployment by either bringing a reduction in the potential losses or generating additional revenue. From the perspective of DISCOMs, the immediate concerns that can be observed in large scale solar rooftop penetration are as follows:

There are limited provisions on real-time monitoring of solar generation and participation in system operations. With an increase in solar rooftop penetration, this is becoming an essential part for DISCOM operations and dedicated monitoring systems are required at the DISCOM control centres to monitor the generation from the solar rooftop installations at real-time. While sizeable solar rooftop plants have appropriate remote monitoring mechanisms, the smaller plants more often than not, lack the means for continuous monitoring of generation. Plant-level performance monitoring carries an additional cost for the developers. But, mandating meters with communication and remote monitoring provision is vital for DISCOMs to keep track of generation for solar rooftop plants on a real-time basis and will also facilitate easy DISCOM operations. Further, it is also expected that a large-scale replacement of the existing meters with the more sophisticated smart meters will solve the issue.

Strict MNRE Grid Connects Solar Rooftop Phase II guidelines allows DISCOMs to implements new business models for solar rooftop deployment; most of the DISCOMs continue to adopt conventional CAPEX and RESCO business models. With more consumers now becoming prosumers, DISCOMs also need to shift their roles from only the supply of power to the loads as well as the supply of power from the loads. For a long-term plan, investing in rooftop solar will help DISCOMs to reduce its power purchase costs. The cost of generation of solar rooftop projects has come as low in the range of INR 3-4 per kWh, which is fixed for 25 years whereas the power procurement cost of DISCOMs is increasing year on year. State regulators issue regulations which allow the implementation of solar rooftop under net metering or gross metering arrangement under conventional business models. Whereas DISCOMs need to take the initiative to develop a plan for integration of solar rooftop PV power under various business models which are in line with the DISCOM’s revenue gains, as well as consumer’s benefit.

4.DISCOMs still have to pay the fixed-charges to the generators, as the contracted power cannot be surrendered under their long-term Power Purchase Agreement (PPAs). Most of the State Electricity Regulatory Commissions allow consumers to install solar rooftop projects up to a specific limit with respect to connected load/ contract demand. Due to this reason, even after consuming the necessary power from the rooftop plant, consumers considerably save in variable charges and continue to pay fixed charges. In the current tariff structure, the contribution of fixed charges in the ratio of revenue from fixed charges to variable charges is low. The tariff structure followed by the DISCOMs shall be revised such that in the revenue recovered from fixed charges increases and DISCOM can pay the fixed cost incurred due to long term PPAs.

5. Operational challenges at DISCOM level DISCOMs continue to face the challenge of limited staff especially in small states or UTs, which needs to be engaged for activities related to solar rooftop deployments such as inspection or meter installation and grid integration. Further DISCOMs also face the challenge of availability of trained personnel to undertake the responsibilities of solar rooftop installation and monitoring, and therefore efficient and regular training programs are of dire necessity.

Under Phase-II of the ‘Grid-Connected Rooftop Solar Programme’, deployment of rooftop solar is also linked with incentive for DISCOM from MRNE, which has led to DISCOMs to act aggressively for large scale deployment of rooftop solar in the states. MNRE is also providing funds to DISCOMs to raise awareness in the general public. Consumers are increasingly becoming more informed about the latest advancements in technology and its related policies and incentives, cost savings, quality of the equipment, operation and maintenance (O&M), and other industry innovation and practices. Additionally, MNRE has also mandated all the DISCOMs to implement Rooftop Solar Portals for consumer application and all the approvals upto commissioning of solar rooftop plant. This will allow transparent monitoring of the deployment in the states. Further MNRE is in the process of preparing Approved List of Models and Manufacturers (ALMM). Upon completion of process, only vendors registered under ALMM will be allowed to participate in government tenders, which will allow proper monitoring of quality rooftop solar installations.

PV holds a vast potential for growth across India and should be promoted to help meet the growing energy needs in the country. Studies have shown that despite all the pros of rooftop solar PV, the challenges cannot be overlooked, concerning the technical, operational, financial and administrative aspects of it. Diligent practices and approaches need to be adopted to tackle the issues faced by the DISCOMS in implementing the prescribed practices. Awareness campaigns in the consumer segments can be beneficial in highlighting the benefits of it. Capacity building programmes organised by the DISCOMS could prove to be essential for training the officials, engineers, technicians regarding the various aspects of rooftop solar PV.